But that immediate embrace was a warning that caused me to set a different course for Semiotext(e) during the ’80s: Success was a sign that the group was becoming closed and too dependent on the opinions of art institutions. (Guattari had written extensively on subject and subjected groups, and I had thought a great deal about the concept.) A magazine like Semiotext(e) couldn’t afford to be in the position of fulfilling an audience’s expectations; it could only create new ones. So I cancelled a second “Schizo-Culture” issue, which had already been in the making, and subsequent issues were committed to shifting ground, to keeping everybody on their toes, deliberately losing some of the audience while gaining new readers.

The first issue to follow, “Italy: Autonomia: Post-Political Politics” (1980), investigated the Italian mass movement that had been extending the project of 1968 by reinventing the rhizome politically across ideological divides, extending from the postmodernist wing in Bologna to the “Volci” collective—Marxist troglodytes with whom I squatted for a while in Rome, researching for the magazine. (The latter occasionally expressed their political frustrations by bombing at night.) Bolognese Autonomists like Franco Berardi, aka “Bifo,” who created the famous neo-Dada free radio “Radio-Alice,” were fascinated by techno-intelligence and its potential for popular resistance. They advocated, for instance, replacing street barricades (and old-fashioned confrontations with the police) with more abstract obstacles, like tinkering with traffic signals throughout the city to create huge traffic jams.

At the time, Autonomia had been almost crushed by the unlikely conjunction of the Communist Party, the Christian-Democratic government, and the Red Brigades; most of its original leaders were in jail. Semiotext(e) intended to draw the attention of the American Left to their plight, but the response was disappointing. No one dared touch the movement. So, wondering whether Foucault’s “Schizo-Culture” assertions about the armchair politics of academic radicals had been right after all, we immediately shifted focus to another topic that would make academics uncomfortable: sex…. 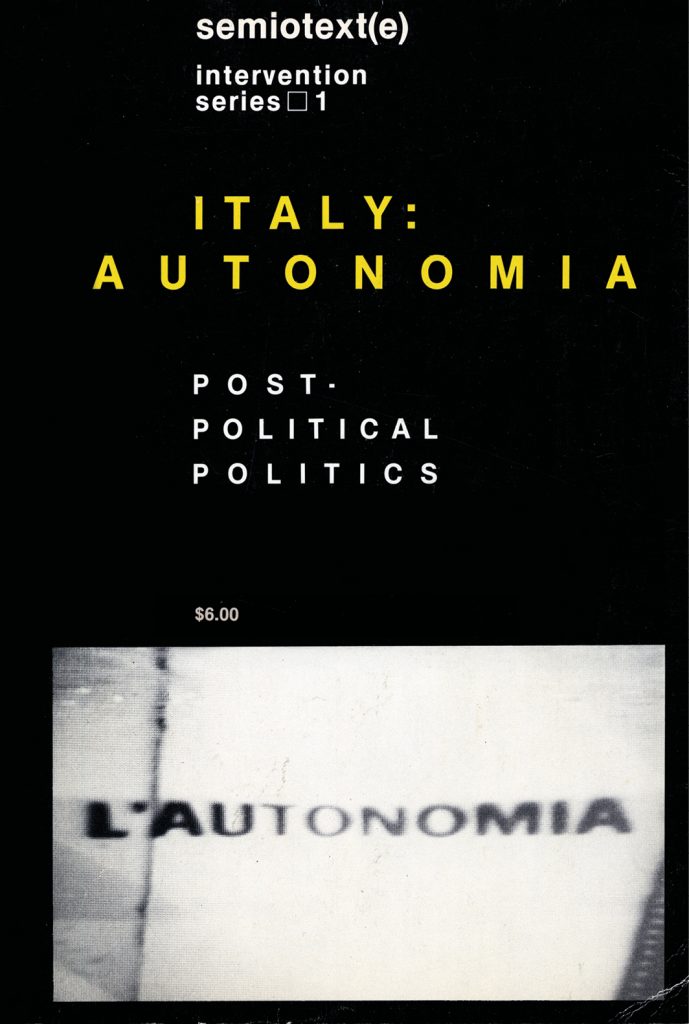