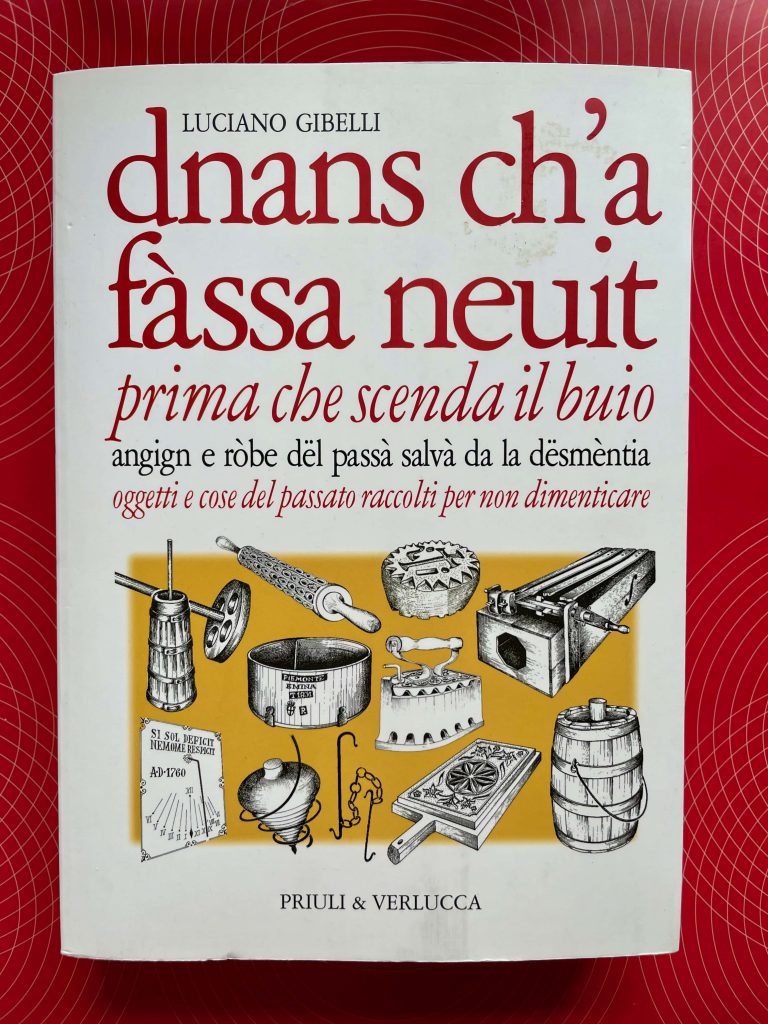 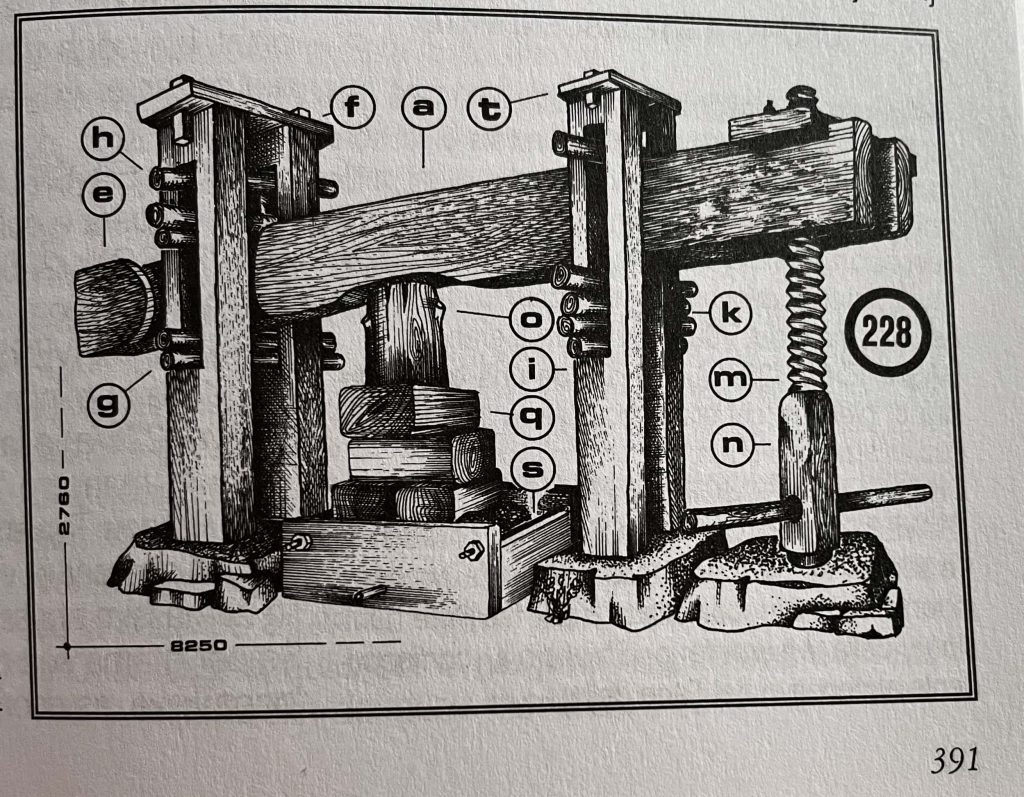 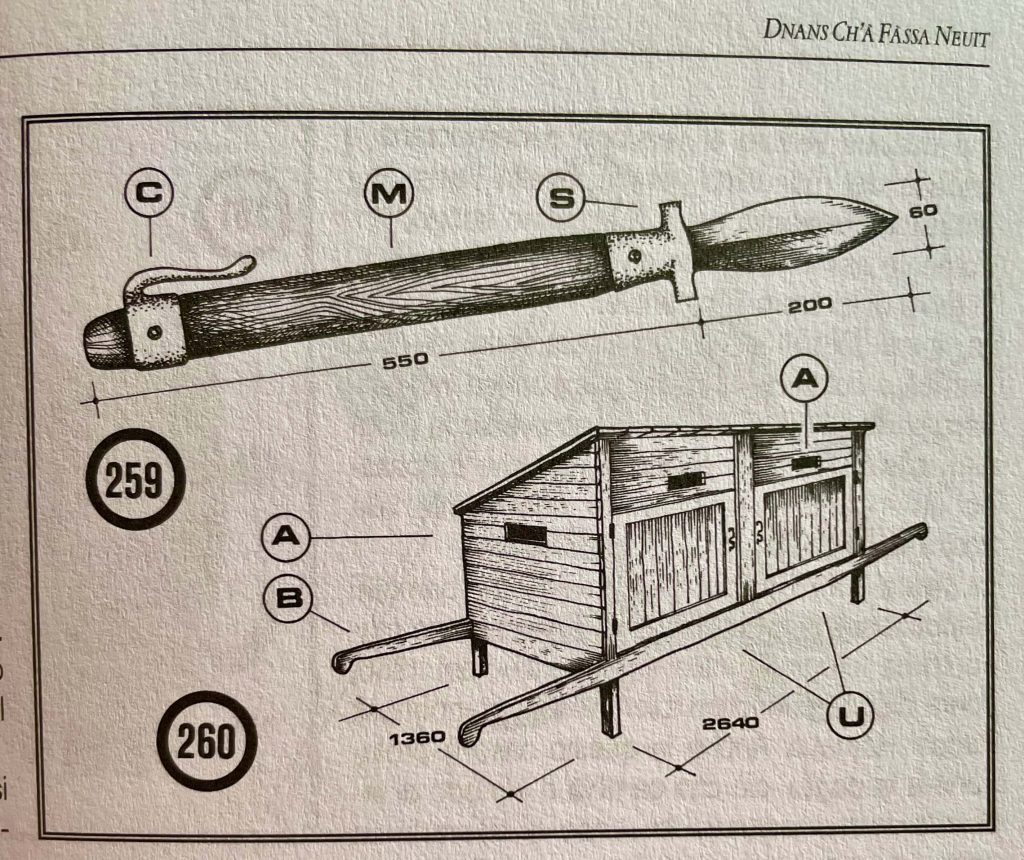 *The late Luciano Gibelli’s hefty tome on old and little-known Piedmontese tools, a regional classic despite its bulk, is hard to categorize; it’s not a how-to book, but rather a work of folklore and material culture. Along with six hundred implements of pre-industrial Piedmontese life, described in the Piedmontese language, it also has recipes, a herbarium…. Well, why not let Primo Levi describe it? Levi wrote the book’s introduction, which, as far as I know, has never before been translated into English.

Historical secrets of six hundred tools of the past

A book that is singular in many ways has been published, and is for sale in major bookstores: Luciano Gibelli’s “Before the night falls – Dnans ch’a fassa neuit.”

Singular because it is bilingual, that is, written in two parallel versions, Italian and Piedmontese; because despite the elegant editorial appearance, the author published the book at his own expense: but above all because the book’s topic is so singular. This is specified in the subtitle: “Tools, objects and things of the past, collected so as not to forget.”

The author, fifty-year-old Luciano Gibelli from Canelli, is a mild-mannered enthusiast with no academic qualifications. He is a curious and precise amateur, driven by his desire to prolong a civilization that is about to perish. This civilization is enclosed in the objects that only the oldest among us have seen, or have heard described by parents and grandparents. Gibelli makes little use of book-learning, and relies instead on good-natured interviews with old people from the villages. He gives us a philologically complete portrait of each thing, with its name, origin, use, and illustrations that he himself traced from life, accurately measured to the millimeter.

He found many objects in those country attics that were dear to Gozzano, “where the junk of the centuries sleeps.” Other objects are no longer available, but when memory remained, he reconstructed them, with the wood and the metals of the past, so as to see them, to feel them in the hand and check their operation. This was an almost religious work, of devout patience and refined manual skill: but you can also recognize the pious effort of the artist who paints the portrait of a loved one no longer with us.

However, this rigor is coupled with a sense of fun and freedom in the book’s design. It would be more correct to say that the book has no design: the argument arises from the topics, discursively, like a chat between friends around a fireplace. From the house of the past, we move on to the bricks, the tiles, and by analogy to the hearth, the use of fire itself and the various archaic ways (but not so much!) of kindling fires. From weights and measuring devices, we move on to certain distant bureaucratic customs, to writing tools, inks, and seals, and so on.

The author is not afraid of digressions: on the contrary, he finds his best inspiration in the affectionate description of family rites, feasts, extinct customs.

See, for example, the pages in this work, from the technological description of church bells, we come to hear in anxious nostalgia about the various ways in which the Gaudietta, the Concento, the Melodia were once played: voices silenced, or in artificial survival.

Who would know how to cut a quill pen today? A drawing illustrates the seven phases, and another shows us the “temperatoio,” a multi-tool that was used only to cut the feathers and sharpen them: we also learn that, due to the different curvature, the most valuable feathers were those taken from the left wing. Those of the right wing hindered the writing, because the feather tips were too near the eyes of the writer.

Immediately afterwards, no fewer than ten essential accessories are listed for the scribe, including the portable inkwell, the powder for drying fresh ink on paper: this too is made superfluous by the invasion of ballpoint pens.

Through the six hundred entries of the book, we learn that in a time not remote they once used, in emergencies, glasses made of copper. They were copper blinders with a tiny hole, which, by reducing the light to the pupils, equally reduced all defects of near and far sightedness: if the lighting was strong, at least it allowed a needle to be threaded. We find tools and rules of games that have disappeared, such as the spinning top, the “lippa” (or “cirimela”) and the sweeping game.

We learn that the farrier had at least three types of nails for horseshoes: normal nails, climbing nails and nails for ice. Often, before tackling a long climb, the carter himself had to substitute horseshoe nails, as is done today with snow chains on tires.

Hundreds of recipes for poverty cuisine are read with nostalgia and curiosity, and among these no fewer than a dozen concern the humble waffle (“Canestrej”) in which the fundamental ingredient, to be added to the flour, ranges from chocolate to garlic: the waffle iron is described and illustrated, that indispensable tool to produce the goods.

The various recipes, the kitchen tools and the edible herbarium take up a hundred pages, and the herbs described are more than a hundred: it is significant to see among these also many edible “weeds.” One thinks of the gaunt girl in Manzoni’s novel, who stole from the cattle those pasture herbs of which “hunger had taught men that they, too, could live on.” That was in a time of famine, but famine was almost always nearby.

Better than a direct description, these voices portray an era when the kitchen was the heart of the house and meals were a ritual: a poorer, slower pace of life than ours, more precarious, but also more convivial and humane.

Before, in fact, the darkness of oblivion (of the “desmentia”) falls, it is good to know the shapes of the lamps and lamp oil, of the threshing flails, of the sundials, of the wine barrels, of the window-latches, of hundreds of other objects shaped by the experience of many centuries, and which have now disappeared or are disappearing.

Our handiwork resides, not only in the illustrious works of individual creativity, but also in these humble tools, companions of our ancestors on the path of life. PRIMO LEVI