Artissima summarizing itself for 2021

*It’s great that they’re alive, after what the European cultural scene has been through (and continues to experience). 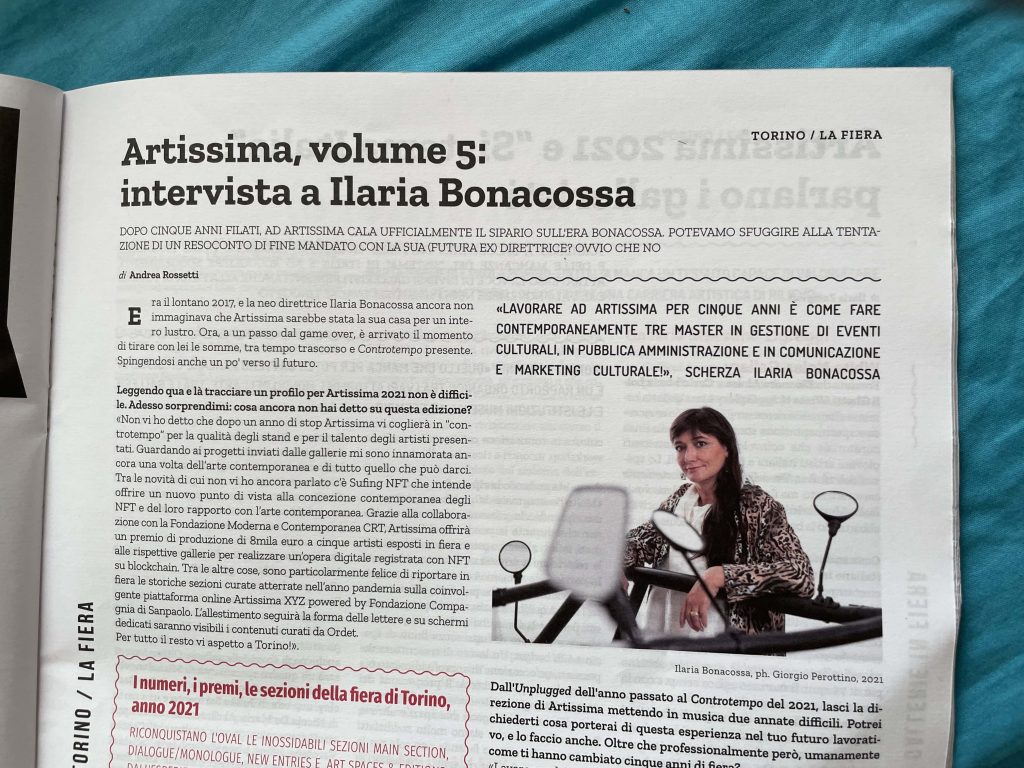 Artissima has closed its 28th edition

Artissima, the International Fair of Contemporary Art in Turin, closed on November 7 with 31,500 visitors. Directed for the fifth consecutive year by Ilaria Bonacossa, the fair confirmed its leading role amongst influential contemporary art events with international visibility, providing a platform for emerging talents and innovative galleries. The 2021 edition was the first to feature Intesa Sanpaolo as main partner of the event.

The 7 sections of the fair, including the 3 sections curated by international boards presented in Artissima XYZ (physically and online thanks to the support of Fondazione Compagnia di San Paolo), contained approximately 1,500 artworks. The fair welcomed over 450 collectors from 21 countries and almost 5,000 VIP guests and 400 art professionals, including museum directors and curators. A demonstration of the trust and importance that continue to be assigned to this event, also on an international level.

Ilaria Bonacossa says:
After almost two full years of complexity, I didn’t dare to hope for such success. The large corridors made the fair more monumental and safer at the same time, preventing close gatherings and enabling visitors to enjoy the art in total safety. Beautiful stands, an international and Italian audience, and sales above and beyond our most optimistic hopes. The art market has truly restarted in Torino.

Highlights at the fair included the project Hub India – Maximum Minimum in collaboration with Emami Art and curated by Myna Mukherjee and Davide Quadrio, providing a surprising overview of the galleries, institutions and artists of a very important region of the world; the exhibition Vitality of time. The art collections of Intesa Sanpaolo; the installation Nunca encontramos a Satoshi by the artist Radamés “Juni” Figueroa; the group show Sustainable revolution featuring the 10 winners of JaguArt – The Italian Talent Road Show; and the works of the winners of the two editions of the Torino Social Impact Art Award, Monia Ben Hamouda and the collective MRZB (2021), Caterina Erica Shanta and Liryc Dela Cruz (2020).

In town, Hub India – Classical Radical, a three-part museum show at Palazzo Madama, MAO and Accademia Albertina, visible until 5 December; the exhibition Rimbalzi at Grattacielo Intesa Sanpaolo, on view and online until 5 December; the installation 6 CHAIRS by the artist Augustas Serapinas at the Hotel Principi di Piemonte | UNA Esperienze; and the Artissima creative lounge What a Combo! at Combo.

Prizes and Acquisitions
Ten awards were assigned during the fair alongside special acquisitions.

The FPT for Sustainable Art Award, promoted by FPT Industrial, was awarded to Lennart Lahuis, presented by Dürst Britt & Mayhew gallery, The Hague.

The Carol Rama Award, promoted by Fondazione Sardi per l’Arte, was awarded to Ivana Spinelli, presented by GALLLERIAPIÙ, Bologna.

The new Xiaomi HyperCharge Award, promoted by Xiaomi, was awarded to Gillian Brett, presented by C+N Canepaneri, Milan and Genoa.

Five artists have been selected for Surfing NFT, the debut project of the platform Beyond Production produced in collaboration with Fondazione per l’Arte Moderna e Contemporanea CRT and Artissima, inviting contemporary artists to experiment the production of a work using NFTs and the blockchain technology: Darren Bader – Franco Noero, Turin / Claudia Comte – König, Berlin / Matteo Nasini – Clima, Milan / Sarah Ortmeyer – Dvir, Brussels and Tel Aviv / Damon Zucconi – VEDA, Florence. Among the 5 works, one will be selected as the winner of the OGR Award and will be acquired by Fondazione per l’Arte Moderna e Contemporanea CRT for its collection.

Thanks to all our exhibitors and partners.

Meanwhile do not forget to visit Artissima XYZ platform: until today (9 November) do not miss works, videos, interviews to discover the curated sections of Artissima 2021 only at xyz.artissima.art