Announcing a new exhibition of five artists who use generative art to create new universes and breathe life into novel forms. 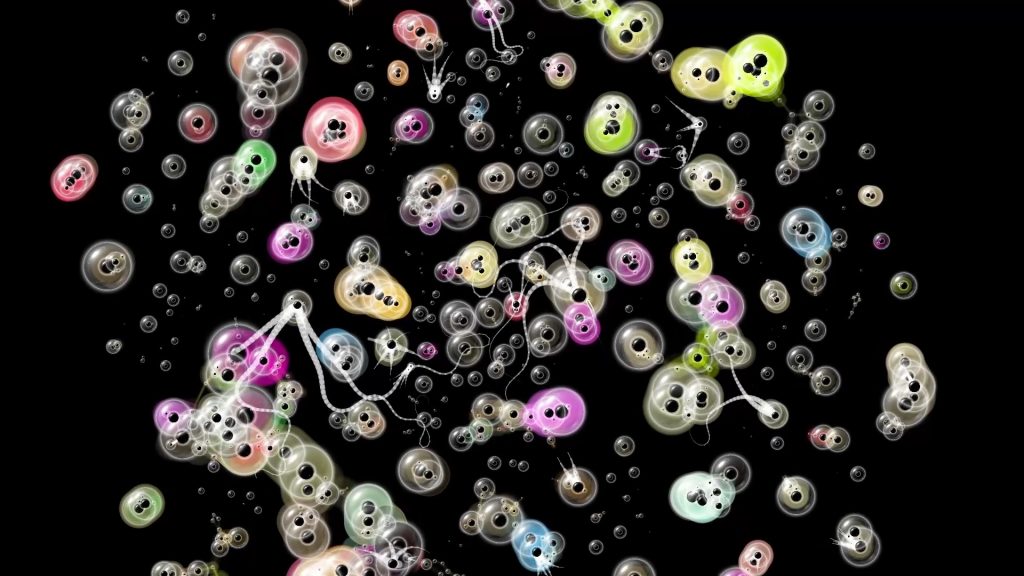 Feral File and Bitmark are pleased to announce the gallery’s twelfth exhibition, featuring 10 generative artworks that leverage Edward Tufte’s concept of small multiples to explore the process of creation.

Each of the 10 artworks will be released as an edition of 100, with each edition priced at $150 USD. There will be 50 sets made available at a price of $1,500 USD. Collectors can purchase the artworks via a Dutch auction. (Please see the Price List for complete detail)

“Rather than act as a mirror, dutifully recreating or reporting back on the world around us, these artists often act as a portal to an entirely new universe. A universe where the artist has crafted unique entities from scratch through many compressed cycles of evolution. A universe where fascinating beings and impossible environments blend the foreign and the familiar, giving us a sense that there is life here, but perhaps not life as we’ve known it.

In this show I wanted to focus on the artistic process for each artist, highlighting how the proliferation of work afforded by digital tools often leads the artist to spend as much time curating as creating. However, it can be hard for the viewer to gather much context when looking at just one or two works by an artist. So as part of my prompt, I also asked them to leverage Edward Tufte’s concept of small multiples. Small multiples display a set of images in close proximity together, typically in a grid-like pattern, to facilitate comparisons across the full group of images at a glance.”

Preview of the Artworks:

“Hypothetically Micro” confronts us with a dozen bold ribbon-like entities placed against flat backgrounds of solid color. Familiar on the surface, they become increasingly difficult to place, particularly in terms of scale. Velitchkova’s lyrical specimens are artfully cropped in a way that suggests we may be looking at the tail, wing, fin, or frond of a much larger organism. Yet something about the color palette also recalls the dyes used in microscopy: These forms could just as easily be microorganisms as much larger birdlike or fishlike creatures. Her work shines next to other generative artists for its elegant biomorphic forms and subtle exploration of color. Velitchkova is a magnificent biological architect, painstakingly crafting visual systems while bringing delicate new creatures to life.

“Entity” is a wonderful dance of life. Colorful microorganisms are born, engage in naturalistic individual and group behaviors, evolve, and then terminate, making room for new specimens to emerge. The balletic choreography is governed not by linear animation but through the artist’s deep exploration and understanding of force-repulsion fields. Indeed, work with this complexity and nuance would seem impossible to animate by hand and feels closer to systems and behaviors we are accustomed to seeing only in nature. Such is the unique brilliance of Jared S Tarbell that his work does not capture nature, it rivals it.

This work is a programmed system and the video artifact was a capture of live interaction by the artist. The collectors will receive the interactive software as part of the acquisition. The music in this piece is “Infinity Machine” by Tonepoet.

“Blooming Valetudinarian” is a stunning interplay between attraction and repulsion. As a group, the forms read as 100 beautiful winged insects, a diverse entomological collection of moths or butterflies. But upon closer examination, many of the butterflies reveal a surreal vignette of entangled biomorphic forms that feel voyeuristic if not bordering on pornographic. Shkipin’s specimens elicit unsettling emotions similar to works from Egon Schiele or Francis Bacon. The images pull in just enough elements from reality to hint at the familiar, while largely leaving us on our own to fill in the blanks. The emotional resonance, compositional awareness, and sensitivity to color, brought by Shkipin highlight what neural networks like CLIP are capable of when placed in the hands of a true artist.